Another email received, at bottom

I have said that it is virtually impossible to make lasting swing changes overnight, but I may have to revisit that belief.

It seems that simply changing one’s setup to the proper one (or closer to the proper setup, if not absolutely correct) can yield immediate results.

I spent two days recently in Goodyear, AZ at the Golf Club of Estrella, and DKondo, the defacto of the Wax Southwest Chapter, received an email from an attendee which he forwarded to me, and I was floored by the results of one day’s attendance at the Summit.

I won’t post the entire email to DKondo, but the pertinent parts go thusly:

After the Wednesday clinic, I put in a couple hours of range time on both Thursday and Friday.

I played at Estrella Saturday and Sunday and couldn’t believe the results! All of a sudden, I’m hitting the ball much longer and straighter. As it turns out, I’m too long too often. More often than not I’m right at the flag, but the ball just waves as it soars over the hole.

…Thanks for introducing me the MCS technique. (Feel free to share this note with DJ or anyone else)

Ah yes… the only “negative” thing about MCS‘ing your swing is that you’re going to have to re-calibrate all of those clubs in the bag as far as standard distance.

I can still remember the first time I flew a green from 150 yards to the hole, with a PW out of the light rough.  And I mean, it didn’t touch any part of that green.

I just stood there, starting at the club face of that wedge in confusion… so I can appreciate that dilemma!

Thanks to “Dan” for that feedback, and keep working on that stance and pivot move! 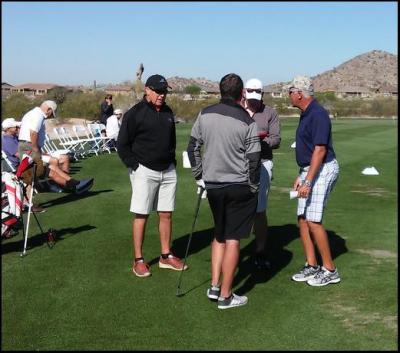 I’ve received another email, this one from “David,” and it’s as much as I could want after working with people on their swings.

And take note of the bolded part, as you all know that MCS is supposed to reduce stress and chance of injury on the body:

DJ, I want to thank you for coming to Goodyear to put on this Clinic.

I understand that this is the first time you have held a Clinic.  I would have never known.  You did an outstanding job!  Jerry was a big help to me also.

For the first time in my life, I have a road map to becoming a better golfer.  I absolutely can’t wait to go out and hit golf balls.

Mike has also helped me fine tune my swing, and today, I hit the ball better than I have for a very long time.  I had 17 drives in play and, of those, 15 were excellent…

The verdict is in – high handicappers all the way to professional tournament player-level swingers benefit from swinging in a more mechanically-correct manner.