I mentioned Fred Couples and his back-crunching swing last week while musing on the origins of the flat-footed golf swing.

And on the posting yesterday regarding my own flat-footed swing?

Just take a look at the difference between my top position and Couples’ top.

Like I said, there’s a way to do something and a way not to do it… and yes, FC is a far better golfer than I will ever be, I’m talking about technique here, not the playing of the game.

I’m not going to say much about Fred Couples’ swing mechanics except this – This is how not to swing if you want to preserve your back and be able to get out of bed when you’re 60 years old.

The thing that kills Fred’s back is that he puts such stress on it through the impact zone that it’s a wonder he can still walk. Of course, sometimes he can’t.

If you watch his swing from down the line, you’ll see how very little weight shift Fred has. He simply takes the club way outside and flips his hands and the club face open, lifting to the top.

From the face-on angle, you see even more clearly in this shot of a younger Couples why he wrecked his back. 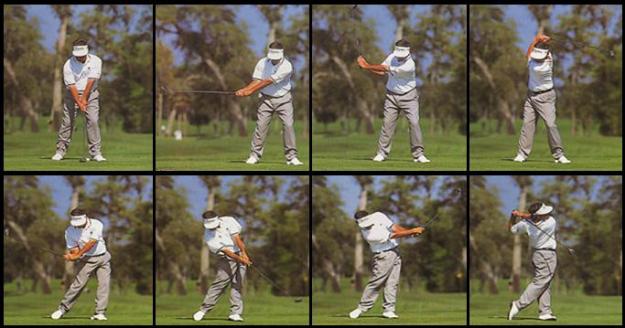 Look at how little weight shift there is to the right, and the almost-reverse pivot on the back swing. This is because of that old villain, the modern swing motion with the planted leading heel, causing the golfer to do all sorts of unnatural things to get to the top of the back swing without lifting the leading heel. It also doesn’t help that his ball is inside the heel with the driver. 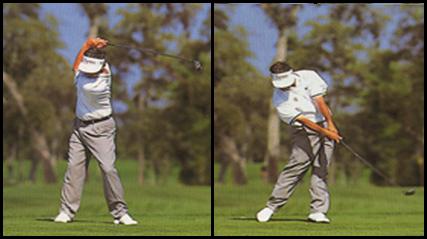 So on the down swing and through impact, Fred has no where to go.

He can’t shift his weight forward or he’ll top the ball or swing right over it, so he has to collapse his spine position and crunch his lower back and waist area to get down into and through impact without moving forward of the ball.

Bottom line: Freddy can still hit the ball a long way, but there are ways to do that without wrecking your body in the process. Guys like Freddie and Tiger Woods make a fortune playing golf, so they don’t take well to the notion of changing their swings, even if it’s destroying their body in the process.

And that’s a shame.

2 thoughts on “Fred Couples – The Back Cruncher”