I have talked about the key to Ben Hogan’s swing being found in the pivot and not anything else he was doing, and there is one picture that you want to look if you’re trying to figure Hogan out.

There’s a before/after illustration of his swing, before and after his near-fatal car wreck in 1949.

I don’t know how accurate the “before” is, since Hogan’s fame came mostly following the wreck and his miraculous comeback to win the ’50 U.S. Open at Merion.

The Clue – If you’re wondering what it is, it isn’t the left foot position at the top in the his “after” picture – that is actually incorrectly drawn.

I’ve also discussed the main reason Hogan’s swing has never really been replicated on the PGA Tour (the restricted-hip pivot) and why people have been unable to learn the Hogan swing from others (bad analysis and modeling). 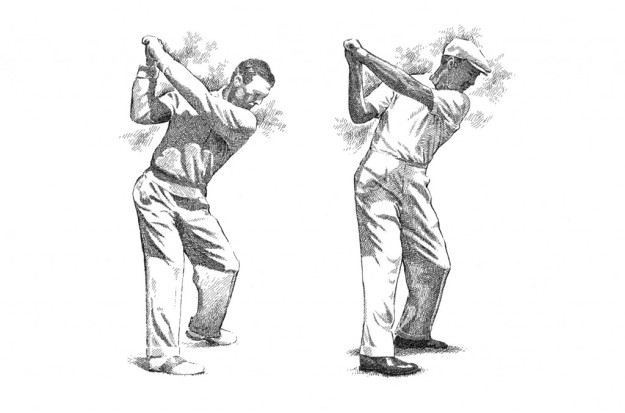 So have a look at this picture, and you’ll see it there, whether you know what you’re looking at or not.

But there’s also a problem in what the “after” picture is showing – something that Hogan didn’t do.  If you’ve been paying attention, you should spot it instantly.

And if you think I’m wrong, just watch this clip of Hogan’s swing and pay attention to that left foot and right hip – you’ll see that the picture is wrong, and that I’m right.

If you want to swing like Hogan, you have to do certain things in the pivot.  Here’s a picture comparison of Tiger Woods and Matt Kuchar at the top, and where they leave Hogan’s model completely.

Here’s a hint – Hogan is pivoting properly, Woods and Kuchar are not.  Big difference, and you can see it in the hips of the three swingers at the top of the back swing.

I’m enjoying the “Finding Ben Hogan” project that began, if you’ll believe it, simply because I looked at Hogan’s swing again after years of swing research, and certain things he was doing just jumped out at me.

As always, much more to come!

5 thoughts on “Ben Hogan’s Secret In One Picture”