I dug this old post up from the former blog, as looking at JT’s address and swing motion here are nearly bang-on with the MCS model and address position, especially the current MCS as shown in the MPS “B” or Playing Swing video.

Hello to JM, who sent me this book to look at back then!

I was delighted to receive an instructional book yesterday from a friend who sent it to me on loan.

It’s a vintage (and by vintage, we’re talking published in 1940) magazine-type book (kind of the size of a Rolling Stone magazine) called “Hit’Em a Mile!” on the long-driving Jimmy Thomson, with tons of photos and sequences taken from the four major angles (front, back, up the line, down the line).

I had never heard of Jimmy Thomson before my friend told me about the book, but this guy was apparently well known in golf circles and not only a good golfer (he won or placed second in a number of tournaments) but a prolific long driver (Byron Nelson named 10 Master Golfers by the club they used, and he chose Jimmy Thomson for the Driver). 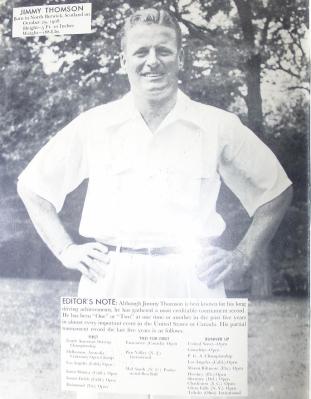 J.T. was a Scottish-born (1908) golfer who won the North American driving championship in 1936. Get this, he averaged 324 yards on ten drives and his longest drive was 386 yards!

He actually took 2nd place at the 1935 U.S. Open at Oakmont, placing ahead of such luminaries as Byron Nelson, Walter Hagen,  Gene Sarazen and Harry “Lighthouse” Cooper.  What’s just as amazing was that he twice reached the 610 yard 12th in two, with a spoon (3-4 wood) for his second shot.  This is in the days of persimmon woods and balata balls.

I have couple of pics from the book that I’m going to show below, and the resemblance to the MCS swing is uncanny only if you forget that most of the golfers of the old days had much more mechanically-sound swings than the players today.

It’s just a fact that golf techniques have become less and less sound, in contrast to all other sports where technique advances rather than regresses. 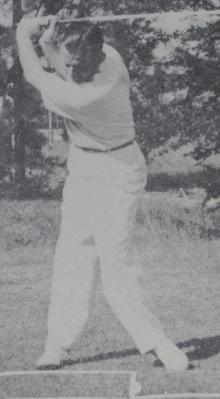 At the top, there’s not much more that can be said other than, how MCS is that top position?

He also said that the left arm is extended but not rigid, which kind of goes with what I have said about my own left arm not being ramrod straight, just extended.

In the book, Thomson talks about the back swing starting with the body turn and not the arms.

He obviously was a “full body turn” guy, not a rubber band separation guy.

That technique didn’t exist until just a few years ago.

At impact, there are several MCS principles that match with Jimmy Thomson’s swing as well.

The left hip has shifted toward the target with a nice tilt, plus you have the increased spine tilt to the right and the head moving down and to the right.

There are so many cool pictures in this book, and what astounds me is that this gentleman was not only a great player but could absolutely hammer the ball. Yet, he was never widely emulated.  Bizarre.

It was said actually that he would have won more tournaments if he hadn’t been such a long driver because the shorter clubs (like the niblick) in those days were not as accurate in terms of controlling direction as the mid-irons.

He was driving it way past everyone, but they were hitting their approaches closer to the pins by virtue of having mid-irons to his niblick in hand.  Of course, if golfers back then had been as obsessive with numbers as they now, he’d likely have realized what was happening at the time.

Anyways, thanks to my friend for loaning me this awesome piece of golf history.  I promise to return it to you, safe and sound, when I’ve had my fill of reading it.