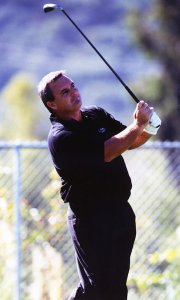 If you look at this video compilation of Mike Dunaway’s swings back when he was the dominant driver on the planet (John Daly said MD was longer than him, Greg Norman called him the best driver of the ball that ever lived, etc.), you’ll see what I was talking about in my posting on the knees being “shock absorbers.”

I want to also mention Mike’s website Dunaway Long, for those who weren’t aware that he has returned to golf after a lengthy absence.

It has always been a mystery to me why Mike Dunaway wasn’t a household name in golf from the ’90s going forward.

Swing techniques have improved over the years, but you still won’t see a better swing action than Dunaway’s from years ago.

Take a look at his swings, and remember my point on never having a completely straight leading leg, even through impact and continuing to the finish.

The father of modern long driving also maintained a good knee flex on the the leading leg through impact to the finish.  He only straightens his leading leg at the end of the swing in a kind of “stick and pose” move.  Through the swing, it’s always flexed.

If Mike Dunaway was the longest and straightest driver in the early days of long driving, the modern era, then I think you might want to revisit that leading leg snap and jump if you think it’s giving you more power. 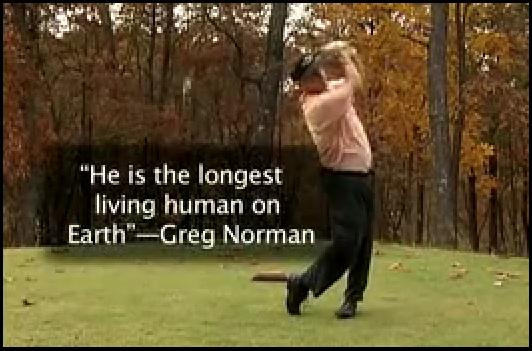 It isn’t – what it’s doing is causing damage to your leading knee and hip area that you will regret in years to come, more likely than not…

Dunaway will forever be (in my opinion) the man with the greatest golf swing that most people have never heard of, and that’s a shame.