Originally posted at the DJ Watts Golf blog on July 22, 2013

As I said Saturday night, I was invited to take part in a friendly charity golf tournament in a better ball format.

djIt was a great day, sunny skies and perfect weather, and the event raised a lot of cash for pancreatic cancer research.

On the course, the only thing that could have gone better would have been if we’d won. We had a flat stretch of even par through the first six holes, which is shameful, then we went -9 the final 12 holes. If we had only holed a few more putts and made a couple better pitches/chips, we could have easily gone -12 or so.

Never mind, the winners shot -16, so the point was moot. 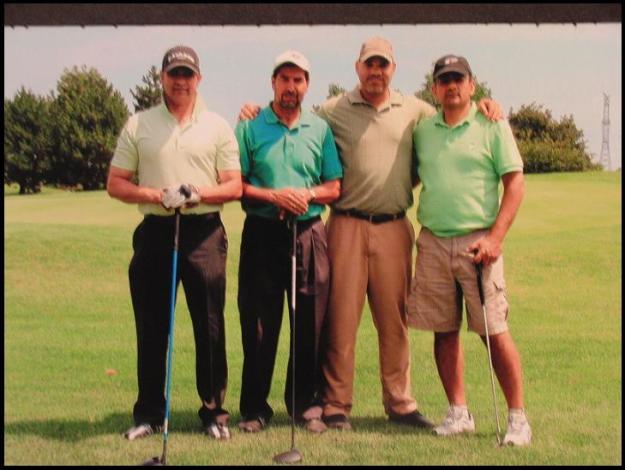 When I drove it 300-320, I drove it as straight as I was pointing. When I tried to put a little extra on my drives, I pulled 3 of them left, then stopped trying to pound it and went back to straight 300-320 yards.

The topping – driving the 325 yard 18th with everyone around the finishing area and putting green. The group ahead was putting out and waved me on, so I pelted a drive straight through the slight dogleg and at them.

For a heart-stopping moment as we all yelled “FORE!!” the ball looked as if it might pick one of them off! Instead, it slammed into the green-side bunker and hopped out onto the fringe.

The above drive was interesting because I felt it was a toe-hit and wasn’t going to go far, as it was a low bullet. But it still ended up just short of the 365 yard green and we had a pitch and putt for easy bird.

Nonetheless, it’s a good angle from which to see my “playing swing,” which is more compact than my driving range driver swing. But it still has some power…

Ball-striking wise, I was hitting the ball great with all clubs. I buzzed the hole from 180 (7i to 6 feet), 135 (GW to a couple of feet) and another wedge that nearly went in, leading all to easy birdie putts.

On a 535 yard par 5, I hit a drive around 320 and then stroked a pretty 4-iron at the green (I didn’t have my 3 and the ball was in the first cut) that ended up about a yard off the green, easy chip and birdie putt… if I hit the ball any better, I’m going to some Q-School somewhere, I tell you friends.

Of course I’m not, but I can’t imagine having swung better than today in my life – and it was my first 18 hole round in two months… the swing is not just holding up, I swing better than ever almost every time out…

That’s it for now, I got a couple of little videos made from the few times I went into the bag for the camera, but mostly we just played, had a great time and I’m off to bed…

Talk to you later, friends.