I was just looking at Ryan Winther (Winner 2012 Remax Long Drive) and see some things that are very similar in the way I myself swing a club.

Not everyone looks the same when they swing, even using the same technical principles. This is because of infinite variations between any two people (even two relatively the same size) in weight, strength, agility, athletic aptitude, etc.

But when I got a gander at Ryan’s swing, I could instantly see the massive leverage in his down swing, as well as that I’m still on the right track in my own quest to isolate the physical factors that make up the building blocks for the most efficient and powerful golf swing I can build for myself using the same Mike Austin/MCS principles of athletic motion.

Once again, the position of the club head at the top, both for Ryan and myself, has nothing to with having an “over-swing” or one that is mechanically incorrect.

Ryan’s swing “flaws” lie in his positioning (mainly, the squared feet positions, and look at Ryan’s left foot on the follow-through — now imagine that he had a flared left foot added to his normal address position) and hip action on the back swing, but once he’s at the top – look out. 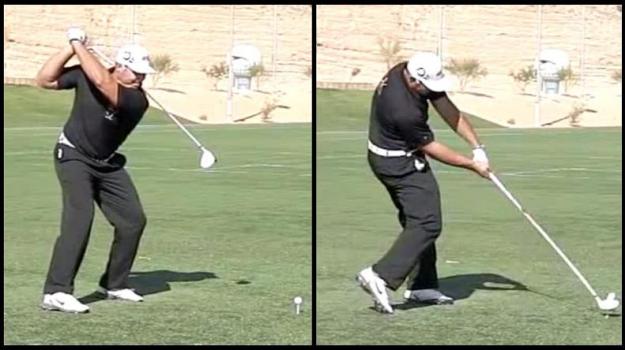 That’s leverage, my friends, from the top down to impact with an extremely tight C7 pivot rotation.

So, time for me to start looking at my own swing to see how to tighten my C7 pivot.

I’m not done yet!

Note: I believe that in not too many years, the secret to long drive success will lie not in muscles, protein shakes and multiple surgeries, but in leverage and proper application of that leverage in the golf swing.

Jamie Sadlowski came close to becoming the model of such…